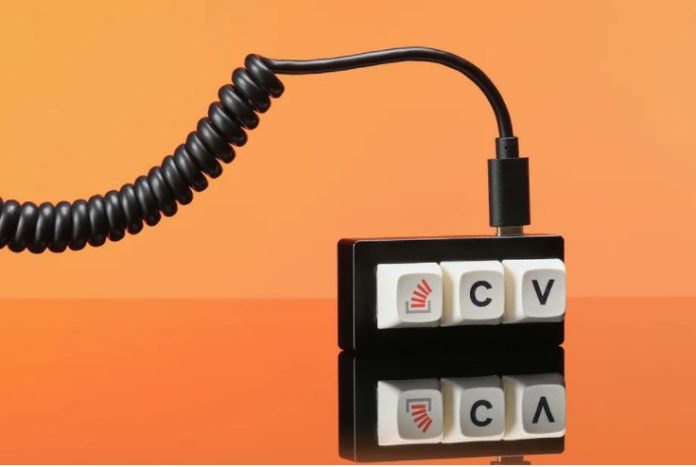 Sure, why not. Stack Overflow has teamed up with tech retailer Drop to release this cute little keyboard called The Key. It’s programmed to do exactly two things: copy and paste.

The product started as an April Fools’ Day joke earlier this year — Stack Overflow users were shown alerts claiming that they had a limited number of copy / pastes and that they could only lift that cap by purchasing The Key. Users, as Stack Overflow’s blog post notes, were disappointed to find out that The Key was not a real thing they could buy.

So, you can buy it now. It’s up for preorder on Drop’s website for $29. Per the company, the next batch is shipping on December 13th.

As you can see, we have three buttons here. We have C, and we have V. I’m not sure what the third button is supposed to do. That’s fine, of course, because the three keys are actually programmable — you can map them to do whatever task you want.

So there are some legitimate pragmatic use cases. First of all, if you make the third key a delete key, you can force every writer to edit their pieces with this device, and our articles will probably end up a lot more concise and better for it. More realistically, you can imagine mapping the keys to raise and lower brightness, for example (a setting that’s a pain to adjust on some computers), or to end a Zoom call.

Plus, imagine how cool you’d look using this in on a plane or something. Can you really put a price on a gadget-savvy aesthetic?

Now, macropads like this aren’t actually a new concept (though three is a somewhat small number of keys). You can get them all over Etsy — there’s one that’s literally just an Escape key.

But in addition to its unique preprogramming, this one does appear particularly well-made. It’s outfitted with Kailh Box Black Switches, which Drop claims will deliver “an ultra-smooth linear feel.” The case is CNC-machined aluminum with custom XDA profile keycaps. I’m also seeing a USB-C connector on the back of the thing, and there are feet on the bottom to keep it from slipping.

Oh, and you can also feel somewhat good about yourself while buying it. Stack Overflow is donating all of its proceeds to digitalundivided, and Drop is donating five percent of its portion.

How to Choose the Best Barber Aprons

How to Customize Liquor Bottles To Wow Your Customers?

What To Look for When Buying a Retro E-Bike?